1985 Composer John Luther Adams (www.johnlutheradams.com) of Fairbanks was planning to picked up by Gordon Wright at the Anchorage airport. When Gordon didn't show, Adams called Wright's neighbors, and they found Gordon under the birch tree that grows through the deck of his cabin. It seemed an appropriate place for him to be, there on the deck of the cabin with a view of the waters of Turnagain Arm. Adam's new work, Dark Waves, was performed by the Anchorage Symphony February 17th. Gordon had planned to attend. Instead, John dedicated the first performance of Dark Waves to Gordon. In John's words: "Gordon told me several times about a piece he intended to write, inspired by the sea at Timber Cove, California, where he's been spending his winters in recent years. Whenever he talked about this piece, he spoke rhapsodic, poetic words. And I always told him: 'You should write it!' "The week before the premiere of Dark Waves, I gave Gordon his copy of the score. He looked it over for a few minutes, looked me in the eye and said: "Well. I don't have to write my Timber Cove piece...You've written it for me!" "So although he never heard it in the air. He heard the new piece in his mind's ear. And he seemed to like what he heard."

Gordon Wright was the friend of a lifetime. For some thirty years he and I shared our two great passions: music and nature. Gordon was my musical collaborator, my fellow environmentalist, and my next-door neighbor. Along with my dear wife Cindy, he was my best camping buddy. Last spring at our annual tundra camp, Gordon and I talked as we always did about life and death, about the fate of our human species, and the meaning of it all. Gordon had little use for religion, which he held accountable for much of the intolerance and suffering of humanity. (I can't say that I disagree). Yet although he might scoff at the notion, Gordon had faith. Like the landscapes of the North that he loved so deeply, Gordon was expansive. He gave refuge. He embodied myth. His spirit lives on in so many ways, in so many people, in so many places. And I know he'll be with us again on the tundra this spring. I wouldn't presume to speak for Gordon. But I offer these lines in his honor. 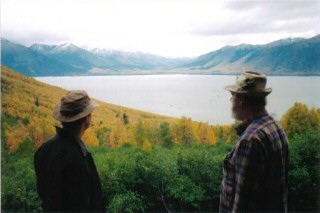 Credo (in memory of Gordon Wright)

I believe in the mystery of being, in the wholeness of life, and the spirit in all things. I believe in the tundra, in the forests, in the rivers, and the nameless mountains stretching to the sea. I believe in the music of the rising wind, the rushing water, and the bell-tones of the hermit thrush ringing in the twilight. I believe we are relatives of the moose, and the swans, of the birch, the cranberry, and the wild rose. I believe that our destiny is to know our place, to live in peace, and to listen to the earth.
John Luther Adams